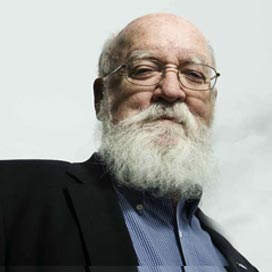 Daniel C. Dennett is one of the leading thinkers of our time on a wide range of philosophical problems, among them: the relationship between the brain and what we call the mind; the nature of consciousness; analogs between human cognition and artificial intelligence; free will and determinism; evolution; and the origin of religious belief. He completed his PhD from Oxford University.

He is University Professor and Austin B. Fletcher Professor of Philosophy, and Director of the Center for Cognitive Studies at Tufts University. He taught at U.C. Irvine from 1965 to 1971, when he moved to Tufts, where he has taught ever since, aside from periods visiting at Harvard, Pittsburgh, Oxford, the École Normale Supérieure in Paris, the London School of Economics and the American University of Beirut. He is currently a member of the external faculty of the Santa Fe Institute and New College of the Humanities in London. He gave the John Locke Lectures at Oxford, the Gavin David Young Lectures at Adelaide, and the Tanner Lecture at Michigan in 1986, among many others. He has received two Guggenheim Fellowships, a Fulbright Fellowship, and a Fellowship at the Center for Advanced Studies in Behavioral Science. He is member of the American Academy of Arts and Sciences. He was the Co-founder and Co-director of the Curricular Software Studio at Tufts, and has helped to design museum exhibits on computers for the Smithsonian Institution, the Museum of Science in Boston, and the Computer Museum in Boston.

His published books include: Content and Consciousness; Brainstorms; The Mind’s I (with Douglas Hofstadter); Elbow Room; The Intentional Stance; Consciousness Explained; Darwin’s Dangerous Idea; Kinds of Minds; Brainchildren Essays; Freedom Evolves; Sweet Dream: Philosophical Obstacles to a Science of Consciousness; Breaking the Spell; Neuroscience and Philosophy: Brain, Mind and Language; Intuition Pumps and Other Tools for Thinking; Caught in the Pulpit: Leaving Belief Behind (with Linda LaScola); From Bacteria to Bach and Back: The Evolution of Minds.