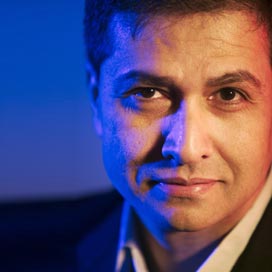 Param Vir is a leading figure in contemporary music. Based in London, his output encompasses works in several genres that include chamber music, symphonic works and opera / music-theatre. His works have been performed by major ensembles, orchestras and opera houses, and presented at several international festivals. He composes prolifically, and recent seasons have seen the premieres of several major works, including a full-length opera Black Feather Rising, a choral work He Begins His Great Trance for the BBC Singers, alongside several works for cellist Rohan de Saram.

Work for large forces include a recent and much-acclaimed BBC Proms commission Cave of Luminous Mind and the hugely successful Raga Fields for three international contemporary ensembles. Most recently Ablaze! for soprano and piano drawing on Tagore’s poems, and Drum of the Deathless for percussion ensemble are clocking up performances. A new string quartet We Want to Live in #Peace (inspired by the Syrian Refugee crisis) has just been released on CD. Recently a song cycle for baritone A Kinsman to Danger, based on the poetry of Sri Aurobindo, has had several performances since April 2018.

Param received a BA Honors in History from St Stephen’s College, Delhi, and an MA in Philosophy from Delhi University.
Website: https://www.paramvir.net/