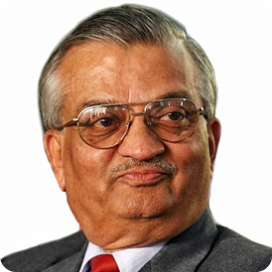 Dr. Anil Kakodkar, a renowned scientist who put India in the top league of nuclear capable-nations, was awarded the Padma Vibhushan, India’s second-highest civilian honor, in 2009 and the Padma Bhushan in 1999.

With his vision, professional expertise, and organizational skills, he became the main force behind India’s self-reliant atomic energy program by developing nuclear reactor systems to address the nation’s power requirements.

He has been the chairman of the Atomic Energy Commission (AEC) of India, the secretary to the Government of India in the Department of Atomic Energy, and the director of Bhabha Atomic Research Center (BARC). He was DAE Homi Bhabha Chair Professor between Jan. 2010 and Jan. 2015 and INAE Satish Dhawan Chair of Engineering Eminence from Jan. 2015 to Jan. 2017.

As a key contributor to India’s nuclear strategic program, he was involved in India’s first successful peaceful nuclear explosion experiment in May 1974 at Pokhran and played a key role in the 1998 nuclear tests again at Pokhran. He championed several international cooperation agreements in nuclear power, acquisition of uranium, and nuclear research. He defended observer status for India at CERN (European Centre for Nuclear Research), partnership in the ITER (International Thermonuclear Experimental Reactor) project and exemption for nuclear trade from Nuclear Suppliers Group (NSG).

Dr. Kakodkar also chaired the committee appointed by the Government of India to recommend autonomy measures to facilitate the IITs in scaling greater heights. Among many others, he was awarded the FICCI Award for outstanding contributions to nuclear engineering & technology, National Citizen’s Award, General President’s Award of Indian Science Congress, INS Homi Bhabha Lifetime Achievement Award, and Eminent Engineer Award 2015 by the Engineering Council of India.