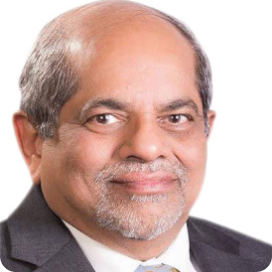 Mr. Ashank Desai is the founder, vice chairman, and managing director of Mastek Ltd., a global technology services company offering digital services and software for public and private enterprises in the UK, US, Middle East, and Asia-Pacific. Mastek is a $200 million publicly-held IT player with more than 3,500 employees with global operations providing solutions to government, health care, retail, & BFSI. Mr. Desai also guides Mastek Foundation, whose mission is to enable ‘Informed Giving and Responsible Receiving.’

He is widely recognized as an IT industry veteran and is one of the founder members and a past chairman of NASSCOM. He was a former president of Asian Oceanian Computing Industry Organisation (ASOCIO), an association of 20 countries.

Mr. Desai has been involved in CII as committee member and as chairman of various sub-committees at the regional as well as national level. His other public contributions include serving as member of the Maharashtra State Security Council. He is the vice chairman at the governing board of Bombay First, an NGO working on the mission to make Mumbai a world class city. He was a member of the International Team on Economic Reforms for the president of Zambia. He is also a charter member of The Indus Entrepreneurs (TiE).

He is very actively involved in the social sector. He founded and funded the NGO Avanti Foundation, which, over the last 9 years, has trained 28,000 schoolgirls from low-income groups to become leaders. He is the founder and co-chairman at PanIIT Alumni Reach for India (PARFI). A 10-year-old not-for-profit organization providing vocational training, PARFI has trained 25,000 high-school dropouts in rural areas. As a result of the efforts, nearly all participants received jobs. He is on the founding board of advisors for the award-winning NGO Avanti Fellows for 9 years. This NGO trained over 60,000 disadvantaged students for admission in engineering colleges and IITs.

Recently, he was felicitated by the prime minister of India, Shri Narendra Modi, for his contribution to NASSCOM and the IT Industry over the last 25 years. He has been conferred with the “Distinguished Alumnus” award from IIT Bombay and “Fellow of the Society” by Computer Society of India (CSI) in recognition of his services to the Indian IT Industry as an entrepreneur and for his contribution to education. He has also been presented with the Honourable Contributors Award by ASOCIO and is the only Indian to receive this recognition twice. He was also conferred with the Outstanding Entrepreneur Award at the Asia Pacific Entrepreneurship Awards (APEA) 2010 India.