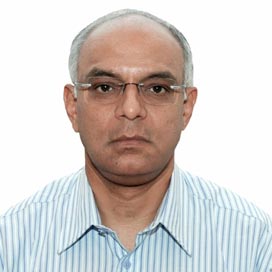 Dr. K. P. Krishnan has served in various fields and secretariat positions in the Government of India, Government of Karnataka, and World Bank. In August 2020, he joined as the IEPF Chair Professor of Economics at the National Council of Applied Economic Research (NAER), New Delhi. Prior to that, he served in the Indian Administrative Service for nearly 37 years.

During his stint in DEA, Dr. Krishnan initiated many extensive reforms to market functioning, instruments, and regulatory structure in the financial sector. He was also instrumental in setting up the Financial Sector Legislative Reforms Commission, which led to an extensive re-writing of laws dealing with financial sector regulatory architecture as well as bankruptcy law reforms.

In the post-Lehman crisis management in India, Dr. Krishnan played a crucial role in his capacity as Secretary of the High-Level Coordination Committee on Financial Markets. He contributed significantly in the establishment and the formation of the founding team of the Universal ID Authority of India.

He is chairperson of a committee of the Ministry of Corporate Affairs to create a regulatory framework in the Insolvency and Bankruptcy Code, 2016. He also chairs an expert committee constituted by the International Financial Services Centres Authority (IFSCA) of the Ministry of Finance on the subject of variable capital company structure for fund management activity.

Dr. Krishnan is educated in Economics at St. Stephen’s College and Law at the Campus Law Centre University of Delhi. He joined the IAS in August 1983 and belongs to the Karnataka cadre. In 1999, he joined IIM Bangalore and was awarded FPM (PhD) in Economics in 2003.