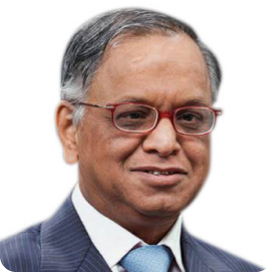 Mr. N. R. Narayana Murthy is acknowledged as the guiding spirit at organizations spanning wide-ranging fields such as information technology, business administration, corporate governance, higher education, and scientific research. A recipient of numerous global awards and honors, he was conferred the Padma Vibhushan, India’s second-highest civilian award, by the Government of India in 2008.

He is the co-founder and retired chairman of the Indian tech giant Infosys, where he was the CEO until 2002 and the chairman and chief mentor until 2011. Currently, Mr. Murthy serves on the boards of Ford Foundation, the Institute for Advanced Study at Princeton, New Jersey, and the United Nations Foundation. He has served on the boards of corporations such as HSBC and Unilever and of universities such as Cornell University, Wharton School, the Graduate School of Business at Stanford University, and the Rhodes Trust at Oxford. He was the chairman of the Indian Institute of Management (Ahmedabad), and the Public Health Foundation of India (PHFI). He is a member of the advisory board of the University of Tokyo (Japan), ESSEC Business School (France), IESE Business School (Spain) and Fundação Dom Cabral (FDC – Brazil). He has also served on the international advisory boards of Yale University, the University of Illinois at Urbana-Champaign, William F. Achtmeyer Center for Global Leadership at the Tuck School of Business, Singapore Management University, INSEAD, the Asian Institute of Technology (Bangkok), the Indian School of Business (Hyderabad), and the International Institute of Information Technology, Bangalore. He is a trustee of the Infosys Science Foundation, which governs the Infosys Prize, an annual award that honors outstanding achievements of researchers and scientists across six categories.

He was conferred the Officer of the Legion of Honor by the Government of France in 2008 and the Commander of the Order of the British Empire (CBE) by the British Government in 2007. In 2005, he was ranked among The Economist’s 15 most admired global leaders.